Singaporean director Thomas Lim, Head of Sun Entertainment Culture Los Angeles, recounts his experiences as a filmmaker and shares how cheetah cubs in the zoo inspired him to realise his potential on the biggest stage in the world — Hollywood.

Growing up in Tampines and having lived overseas for the past 20 years, Thomas says Singapore is still home no matter where he is. 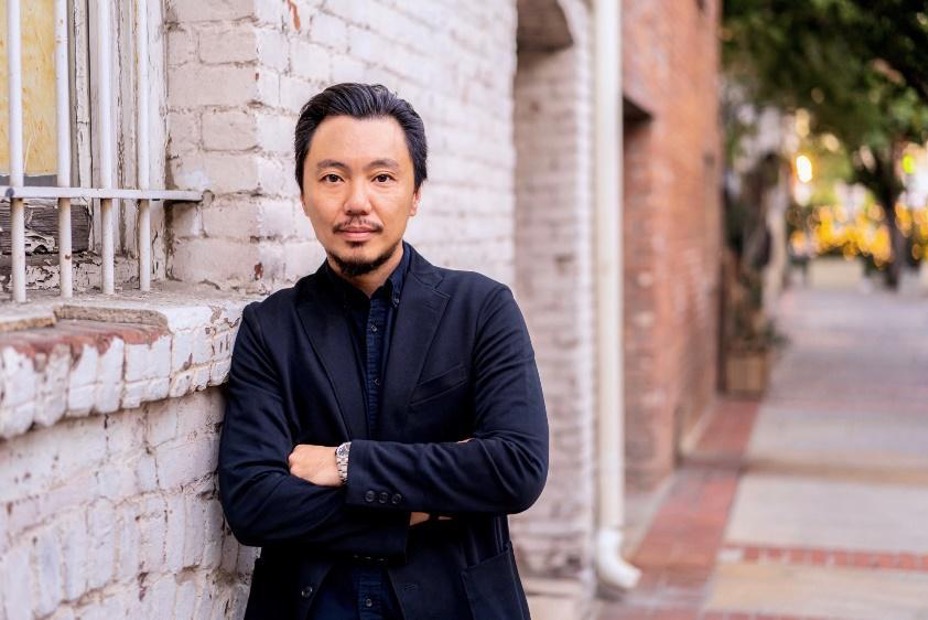 As a mentor, Thomas says he has seen many actors and directors lose themselves to self-entitlement, failing to understand that they need to do everything it takes to achieve goals.

Seeking greener pastures abroad where you are far away from the crucial support of loved ones and friends can be a daunting experience. But for Singapore born and raised filmmaker, Thomas Lim, he learnt from a young age that it was something he had to do, to realise his fullest potential. It is also something he learnt from the most unlikely of places — the zoo.

In fact, it was the sight of cheetah cubs born in the zoo which, oddly enough, remained in the recesses of Thomas Lim’s childhood memories. Later in his teenage years, Thomas would learn that these cubs would eventually grow into ferocious big cats, capable of going from 0 to 120km/h (75mph) in three seconds. Thinking back to those cubs, Thomas realised that being restricted to the confines of their enclosure would be detrimental to their development.

“There’s not enough land in their little enclosure. [So,] you’ll never realise your fullest potential if you’re in the wrong environment!”

It is this strong belief in finding the right environment to nurture his skills which would make him who he is today — the Head of Sun Entertainment Culture Los Angeles, a film production and financing company in Hollywood. The company financed the movie, “Palm Springs,” which premiered in competition at the Sundance Film Festival 2020 and later sold for a record US$22.5 million. 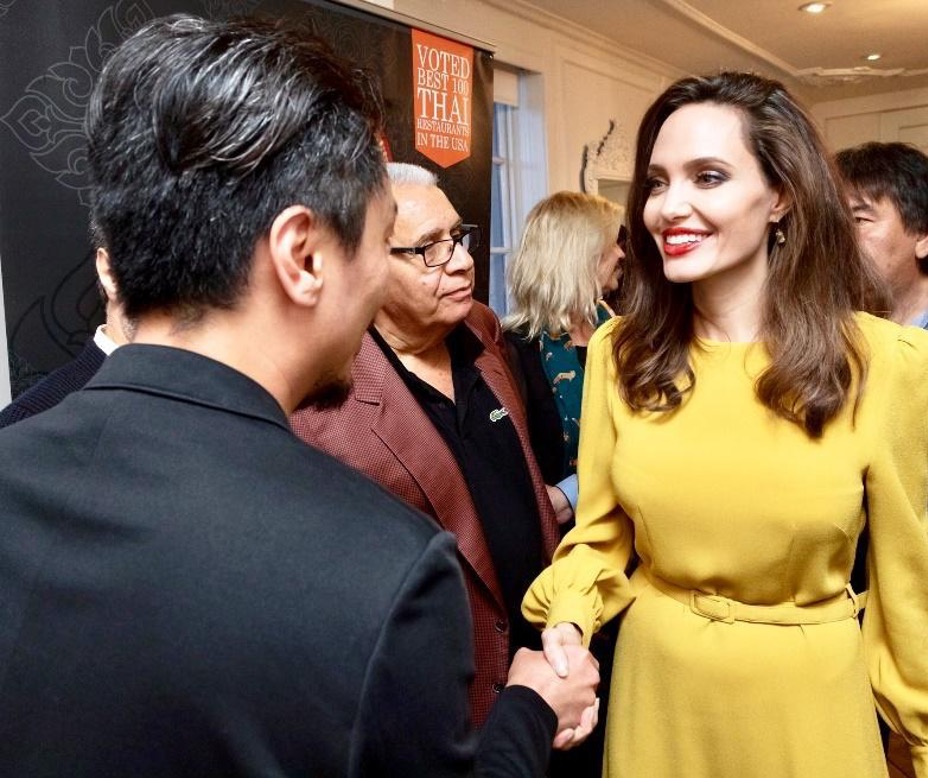 Thomas was a jury member of the Asian World Film Festival in Los Angeles in 2017. He is seen here with Angelina Jolie, whose directorial film “First They Killed My Father” competed at the festival

Another of its films, “Cowboys” also took home an impressive haul at the prestigious TriBeCa Film Festival — winning both the Best Actor and Best Script awards. But Thomas’s rise to prominence was not meteoric but rather the result of persevering despite how gruelling or arduous the process became.

His interest in filmmaking began when he serendipitously participated in theatre productions in Singapore while studying finance. It would eventually lead him to writing, directing, and producing two feature films on a shoestring budget in Macau.

The second film, “Sea of Mirrors,” was shot entirely on the iPhone in Macau and Los Angeles. Thomas explains, “I didn’t want to wait too long to make another film, so I used the iPhone because I embraced the fact that it was a low budget film and decided to use my limitations to my advantage and create a talking point.”

The filmmaker even ran out of money during postproduction for the film. But that turned out to be a silver lining as he would eventually meet his current boss and dear friend, Alex Dong, while trying to raise additional funds. 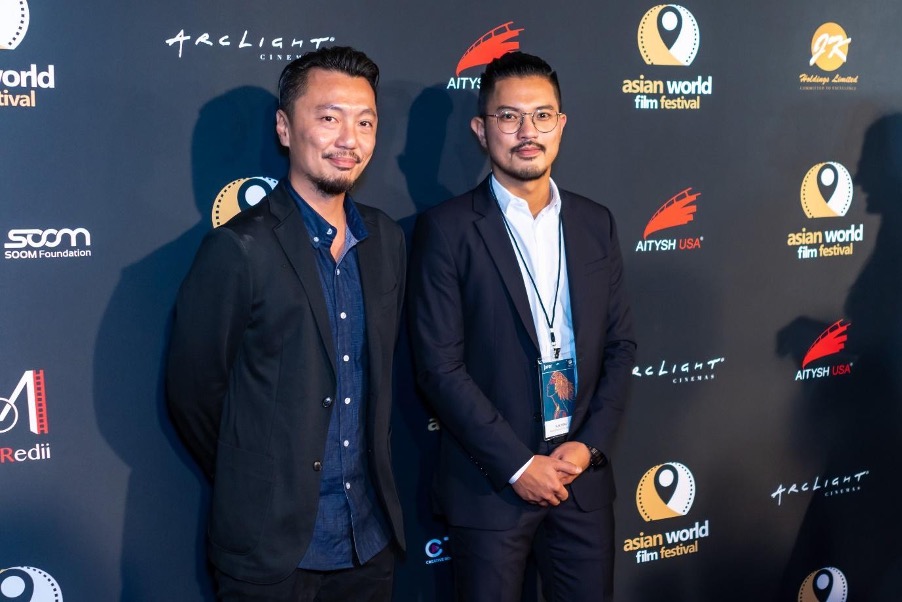 Thomas with Alex Dong, his boss and dear friend, at the Asian World Film Festival in 2018.

Despite these obstacles, Thomas persevered and remained steadfast in his belief that as long as he worked hard and continued to be an eternal optimist, he will succeed one day.

Based on his experience, Thomas shares sage advice for budding filmmakers on setting themselves up for success in the industry, and more broadly, personal growth and development.

1. You’re the average of the 5 people closest to you.

Humans are, by nature, social creatures. From a young age, our preferences and personalities are shaped by our parents, this continues later in our adolescence as well as adulthood. Thus, Thomas believes that the five people who are closest to you determine your future.

This is especially crucial for survival in the filmmaking industry where, Thomas says, filmmaking is teamwork. “Nobody succeeds alone in the film industry. If you surround yourself with motivated and/or successful people in the industry, there’s no way you’re not going to succeed.”

Finding and surrounding yourself with the right people — or your tribe — is vital. To this end, Thomas says he tries to keep three kinds of people around him in close proximity — one older, one younger and one around the same age as him. “Older friends can give us advice from life experience, which is the best kind of advice. Younger ones bring naivety and untainted innocence back to our lives, which is refreshing especially when we’re fatigued or feeling jaded. And finally, a peer provides a healthy comparison and encouragement for what we do. They will also be able to share in your joys and challenges as they would likely be experiencing similar feeling at around the same time.” 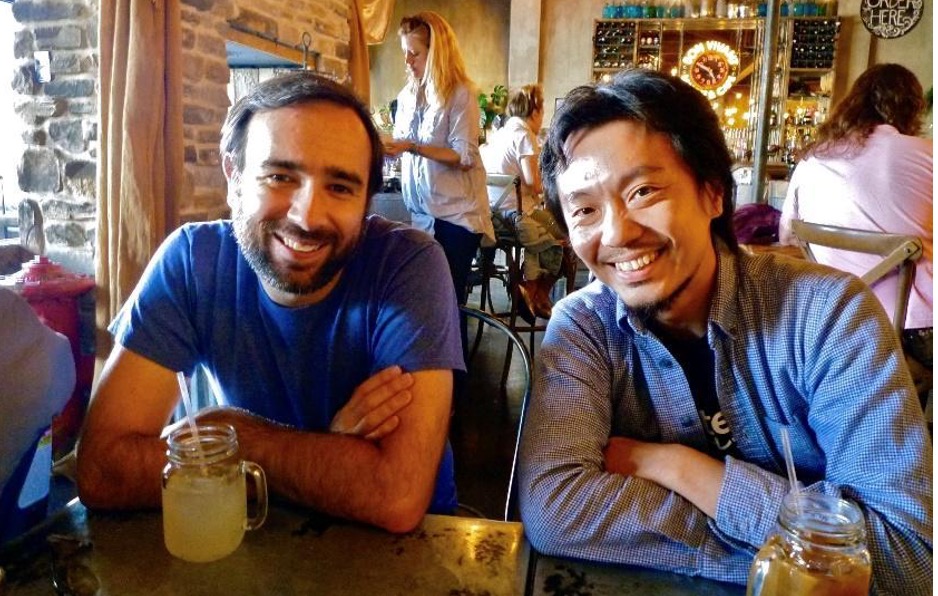 Thomas advises that it is vital to be selective about the five people closest to you in your life. He is seen here with one of his closest friends, Australian filmmaker, Sam Voutas, who has inspired him to move to L.A.

2. You are responsible for your opportunities

As a mentor, Thomas notes that many budding filmmakers and actors tend to take a laissez-faire attitude when it comes to building their careers. “I think many people new to the industry — or even those who’ve been around for a while — fail to understand that they have to do everything it takes to do what they actually want to do.”

Too many also lament that they are bad at networking — and at auditioning, for actors — which seem to suggest that they would have been successful if they were given the opportunity because they are self-proclaimed “so talented,” says Thomas. But they don’t realise that the first talent they need is the talent to land opportunities.

“No one owes them their film, and no one [cares] if they get to make their film or if their lives go down the drain. If they can’t find a producer, then they better be their own producer in order to achieve their goal of being a director.” 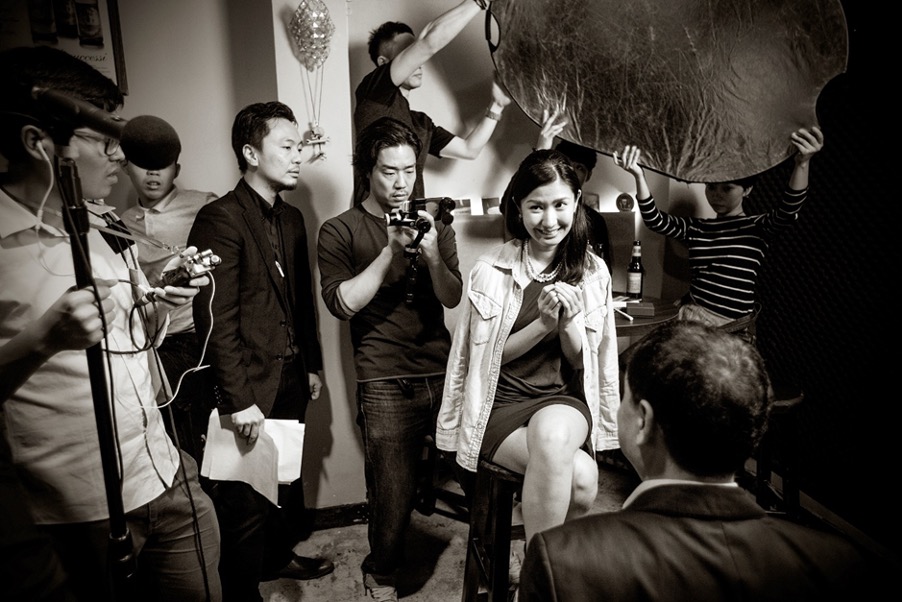 Thomas’ second full-length feature film “Sea of Mirrors” was shot entirely on the iPhone in Macau and Los Angeles on a shoestring budget.

Only when you’ve decided that you are going to give all you’ve got, then great opportunities would become available to you. Thomas urges, “The future is inside of us and what we decide today, becomes our future.”

3. Be tenacious, not merely passionate

Thomas says his mentor in Hollywood, British director, Kevin Connor, gave him a great piece of advice when he was feeling down and out in the early days of living in L.A. Thomas recalls that he said: ‘Things will work out because you want it to. The moment you stop wanting it, it’ll stop working out, because what you’re trying to do is very difficult.’” 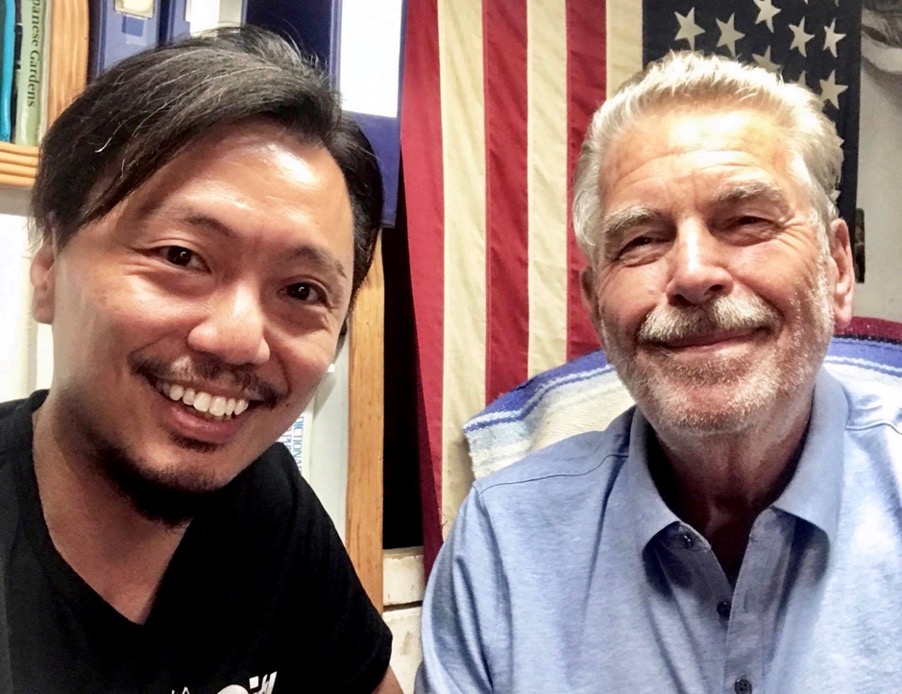 Thomas with his Hollywood mentor, British director Kevin Connor, who looked out for him when Thomas first came to America.

Wanting it and being passionate is also just one-half of the equation. It is more important to turn those words into action and stay the course especially when the going gets tough. Thomas advises, “It’s those who are tenacious and keep trying that make any progress. It’s not easy.”

4. Lean into your strengths as a Singaporean

On the international stage, Thomas says Singaporeans have a strong reputation for being law-abiding, ethical, and educated, making us global citizens who live in a world with no enemies, and a strong passport to boot.

“Singaporeans give out a trustworthy vibe and trust can be hard to find out there. People are drawn to that and could become your friend and ally if you play it right.”

With so much going for you, Thomas urges Singaporeans to improve (if not perfect) their command of English and their “mother tongue” to put ourselves in a stronger position for opportunities abroad. But it all comes down to the desire to succeed, being willing to make sacrifices and actually taking action to create opportunities for themselves. “It drives me insane to think I’m going to become anything less than the best version of myself. You got to want it like your life depends on it.” 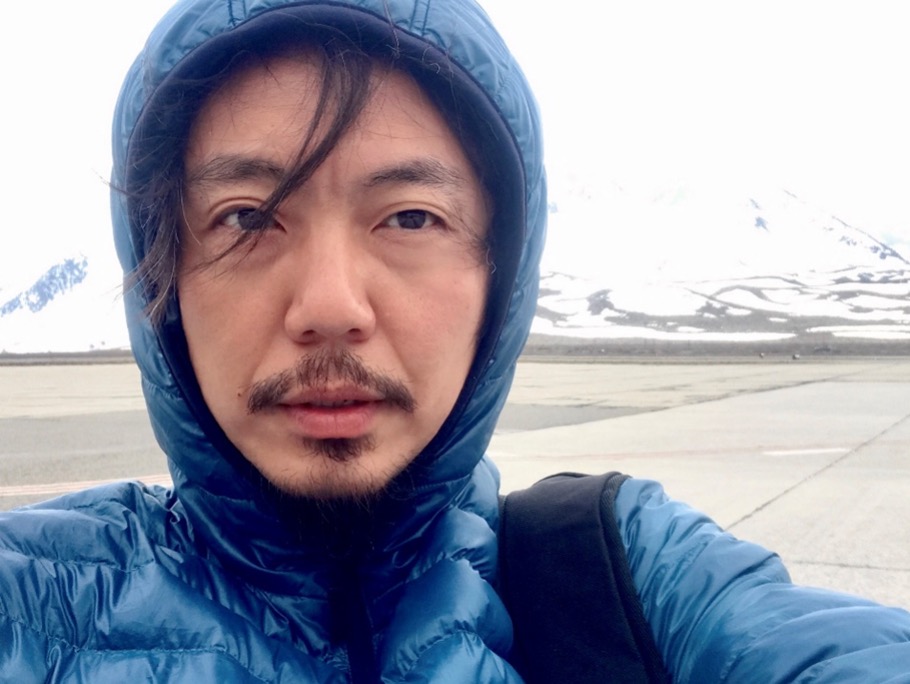 Thomas backpacked to 30 countries before turning 30 and has learned that pursuing his dreams overseas is his lot in life, so he can’t be the type that’s homesick a lot.

5. Give the market what it wants, and you’ll get what you want

Thomas points out, “Too many people think only about what they want, and not what the environment requires of them. Your value is only in what they need of you.”

He adds that even as Hollywood films are seen all over the world, it does not mean that everyone has a chance in Hollywood. “Our value is derived by what Hollywood wants from us and not merely what we think we can offer that the world needs to appreciate,” adds Thomas.

“Always try to understand what your counterpart wants, and you’ll get closer to getting what you want,” Thomas says he overcomes this challenge by equipping himself with the resources that Hollywood desires, which is a strong source of financing, great projects, and channels for distribution in a coveted market — China.

Looking into the future, Thomas hopes to see the Singapore film industry continue to build on its achievements to make even more regionally or internationally recognised films that are also commercial successes.

On a personal level, Thomas hopes to be able to inspire the next generation of filmmakers in Singapore. For too long, Thomas notes, local talents have not been properly nurtured, nor do they have strong role models to look up to.

“A major reason why Singaporean kids rarely follow through with their dreams for too long is that no one before them showed them they could beat the odds and create miracles if they try hard and long enough.”

Thomas wants to use his achievements to inspire a sense of hope to future generations and to show them that it is possible to make it in Hollywood. “If I achieve big things in Hollywood, there will be more Singaporeans doing this in the future, and one day, a Singaporean will win an Oscar, if I don’t do it first.”