We all know the classic tale of Charles Dicken’s A Christmas Carol – a story of about miser Ebenezer Scrooge, visited by three ghosts that changed his life. It has been more than a century since this story came about, but the tale of love, family and Christmas never gets old. This festive season, as we celebrate the season of gifting and giving, gather the entire kampung under the Christmas tree, and let us tell you our version of the Singaporean Christmas Carol lah! 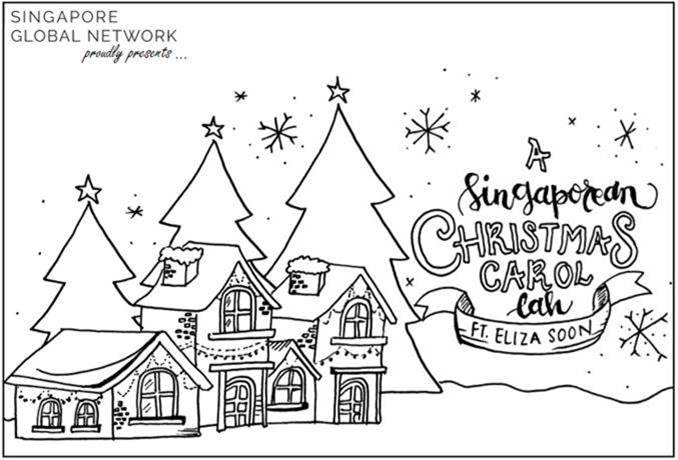 Set in present day Sunnypura, Eliza Soon was just your average Sunnyporean teenage girl. At first glance, you would not suspect a thing about Eliza – her smooth jet-black hair, usually worn neatly in a simple ponytail with her dark blue Waffles Girls School uniform, accompanied by her usual chin tilt that suggested confidence. However, unbeknownst to many, under that calm disposition, was a 16 year old who was desperate to fit in and miserable beyond words.

It was Christmas Eve, and she had just ended tuition lessons as a preparation for the following year’s Junior College subjects. Christmas was, in her opinion, the least wonderful time of the year. On top of the humid weather, the lack of fun activities to do, Christmas meant meeting her snarky relatives who only asked about her ‘O’ Level examination results for the sake of commenting how her cousins fared better. Life was dull, stifling and she just wished to get away from it all. As she waved goodbye to her best friend, Beth Chan, with whom she attended tuition together, she hopped onto her chauffeur-driven Alphard and sighed deeply.

Stepping into her Bukit Wumah bungalow, she looked around at the immaculately decorated house. ‘Wah, Wati and Susi did an amazing job this year’, Eliza thought to herself as she saw the glittering fairy lights strung across her front lawn, and the 10-feet fir tree stood majestically in the garden, adorned with sparkly ornaments, which was all prepared for her family’s dinner party that night. She glanced at the empty garage, and was not surprised that her parents were still at work. After all, it was unusual for them to be home, given their busy schedules. She dosed off in her luxurious leather sofa and before she knew it, she awoke to the smell of cinnamon beef rendang (a Soon Family speciality) and the sound of chatter in the kitchen. Her extended family had arrived and dinner was about to begin. She trudged towards the kitchen, mindlessly scrolled through Instagram and ate her dinner in silence. Beth texted her, but she was too lazy to reply. Her mother nudged her gently, gesturing for her to help Ah Ma peel longans for dessert, but she selfishly muttered that it would ruin her nails, and went back into her bedroom to be alone, and fell into a restless sleep soon after. 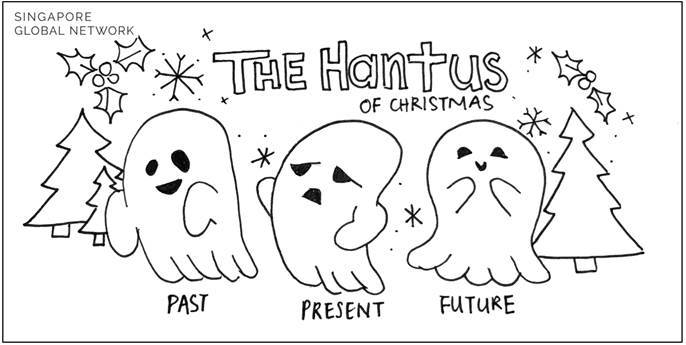 25th December 2013. It was Christmas morning, and her 10th birthday. Eliza hurried down the grand staircase in excitement to see how her parents would celebrate her special day with her. Alas! When she reached the bottom of the stairs, what greeted her instead was a giant 5-ft teddy bear sitting atop an empty table, and no parents. She shrugged her shoulders in disappointment, and reached out to hug her new gift. Without warning, the Hantu of Christmas past appeared and flew her over to Sunnypura Waffles Place. She “appeared” at her father’s office and saw him being reprimanded by his superior for arriving late to work. Having tended to Eliza’s fever the night before, he had overslept that morning. As she blinked her tears away, Eliza was transported to another scene where she watched her mother furiously trying to finish a big project late at night so that she could get a promotion and take the family on a ski holiday in the Alps.

Just as she was about to make sense of what was happening, a flash of white brought about the Hantu of Christmas present. This time, she was brought to Beth’s home where she saw Beth’s mother, Aunty Chan in her bedroom, staring at her wallet and shaking her head. Curious, Eliza followed Aunty Chan as she went to the cai fan stall at the nearby hawker centre, and watched as Aunty picked only vegetable dishes as they were cheaper than meat. Eliza never thought Beth’s family had financial difficulties, as it was a stark difference from Beth’s Instagram persona. Beth had always made time for Eliza whenever she was upset, but never once did Eliza make the effort to know more about her best friend beyond social media.

Swept away again, this time, the Hantu of Christmas future brought her to 25 December 2060 where Singapore became advanced beyond her years; Artificial Intelligence was applied extensively. Robots were managing all the banks and shopfronts. Hawker centres were a thing of the past, as people now ordered food only through Suri and Giggle Home. Her aged parents who were sickly and living in a nursing home, are attended to by robot nurses. Her once best friend Beth was gallivanting along Orchard Road with new friends, leaving her trailing in their wake. Tired of being ignored by her “friends”, she returned to her Bukit Wumah bungalow, this time, void of Christmas décor and alone. In attempt to turn to retail therapy for comfort, Eliza took out her centurion card to buy new sparkly shoes for the New Year online. It was only then did she realise how lonely and empty she was, from living a self-centred life.

With a sudden jolt, Eliza woke up on Christmas morning, 25 December 2019, back in the present. Her parents called her down to eat her favourite breakfast of soft-boiled eggs and kaya toast, hurrying her to finish them while they were still warm. As they sat together as a family at the dining table, Eliza heaved a sigh of relief upon realising that the dreadful Christmas scenes she experienced were nothing but a dream. Thankful that she didn’t have to relive the “haunting”, Eliza reached out and gave her parents a big hug. As they got down to opening presents, they surprised her with the new iPhone Extra that she requested for. Declining the gift politely, from that day on, she vowed to be kind, generous and compassionate, embodying the spirit and warmth of Christmas.

From all of us at SGN, we wish you and your family a Merry Christmas and an awesome year ahead!